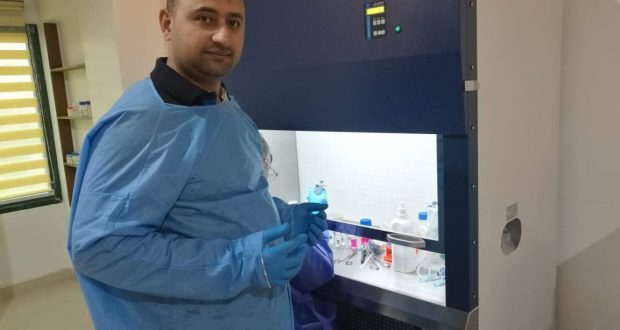 Dr. Zaid Mahdi Jaber Al-Obaidi, a lecturer at the Faculty of Medicine at the University of Kerbala, has participated in the ” Beirut International Invention Show ” (BIIS 2021) which has been organized by the National Authority for Science and Research and announced by the International Federation of Inventors’ Associations (IFIA), based in Geneva as a focal point for it in the Middle East for this union ( IFIA FPME(
Dr. Zaid Al-Obaidi has been awarded the golden medal for his patent for international inventors in his patent, which entitled “HN2-Synthisis Characterization and Biological Evaluation of Ibuprofen Derivate against Colon and Breast Cancer Cell-Lines”.
The show has been held online, in partnership with a number of international societies and Lebanese universities and the experiences of inventors from 14 countries.
The show aims at displaying the innovations of inventors from different countries of the world, and confirming the position of countries on the global innovation map, despite all the circumstances all around the world. This show has been held within the framework of the authority’s strategy based on protecting intellectual property and innovations and for promoting technology transfer. 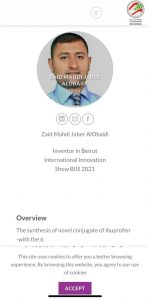 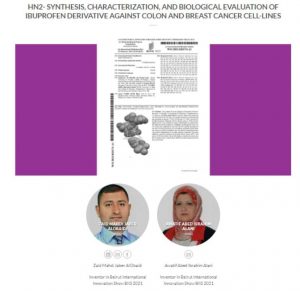 Post Views: 198
2021-04-19
Zainab Ali
Previous: An M.A. Thesis at Kerbala University Studying the Behaviour of sandwich concrete roofs made of lightweight local aggregates under the impact of shock loading.
Next: Two teachers from Kerbala Publishing their translated book with permission by Johns Hopkins University Press